The Nelson-Atkins Museum of Art joins the Kansas City community in mourning the passing of Adelaide Cobb Ward, who died Jan. 7, 2022. Mrs. Ward had been associated with the museum since the 1950s and was a long-time supporter of the arts.

She served on the Nelson-Atkins Board of Trustees and was among 13 people who were named as Honorary Trustees. 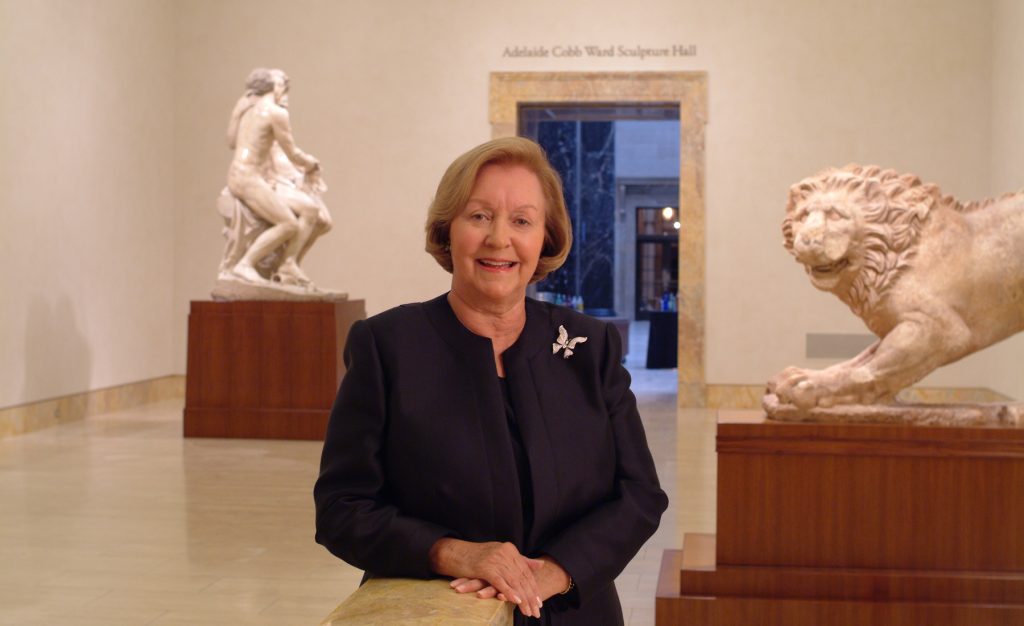 “Addie was a source of enduring support and generosity to the Nelson-Atkins,” said Rick Green, Chair of the Board. “She will be greatly missed.”

In 1997, Mrs. Ward endowed a curatorial chair for European works of art: The Louis L. and Adelaide C. Ward Curator of Painting and Sculpture. She served on the museum’s important Committee on Collections, and she was a member of Society of Fellows.

Also, because of her generosity, the Nelson-Atkins named its new Sculpture Hall the Adelaide Cobb Ward Sculpture Hall, dedicated in 2005.

“Visitors can look above the doorway and see Addie’s name and remember the gracious supporter who made it possible,” said Julián Zugazagoitia, Director & CEO of the Nelson-Atkins. “The Sculpture Hall was designed as the visual and emotional heart of the museum, because it offers a unique vantage point.”

The space connects the beloved 1933 stone-and-marble building with the bold glass-and-steel Bloch Building. At the time of the dedication, Mrs. Ward said, “I’m very pleased to have been able to contribute to the new Sculpture Hall. We should all be proud to have such a renowned museum here in Kansas City. The Sculpture Hall links two artistic visions, honoring the past and bringing us into the future.”

Mrs. Ward volunteered and supported many organizations during her lifetime. Find more details by visiting www.PenwellGabelKC.com.