Kansas City, MO November 11, 2021 – The Nelson-Atkins Museum of Art joins the Kansas City community in mourning the passing of G. Kenneth Baum, 91, who died Tuesday, Nov. 9, 2021. Mr. Baum and his wife, Ann, have been deeply involved in and supportive of the Nelson-Atkins for many years. He served on the Board of Trustees for four separate terms, beginning in 1996 and ending in April 2020.

“Kenny’s tenure on the Board of Trustees was transformative for the Nelson-Atkins,” said Rick Green, Chair of the Board. “He was an energized philanthropist, and he challenged us to be our best. He was consistently a strong voice for what would ultimately make the museum better.”

Mr. Baum’s generosity included the gift of two sculptures to the museum in honor of Ann. He was present just last month for a Society of Fellows and Business Council reception, when the group celebrated his gift of a whimsical sculpture, The Bench, 1989, by artists Niki de Saint Phalle and Marina Karella. The sculpture is on view in Bloch Lobby. In the past, he also gifted the museum with the Yinka Shonibare sculpture Planets in My Head, Physics, 2010, on view in the Bloch Building.

“Whether he was serving on the Board or between terms, Kenny was always a devoted, formidable presence among museum leadership, and his advice was valued and prized,” said Julián Zugazagoitia, Menefee D. and Mary Louise Blackwell CEO & Director of the Nelson-Atkins. “He was unfailingly generous in his love for the museum and also his love for Ann. I will miss him very much.”

Mr. Baum’s intimate involvement with the Nelson-Atkins included serving on exhibition committees, Business Council, Finance, and Development, as well as the Board of Trustees, of which Ann is now a member. He was inducted into the inaugural class of UMKC Bloch School’s Entrepreneur Hall of Fame in 2014, along with Henry Bloch, Barnett and Shirley Helzberg, Lamar Hunt and Ewing Kauffman, among others.

“When I served as Chairman of the Board of the Nelson-Atkins, I knew that Kenny loved the museum and had the interest of the museum first, above all else,” said Shirley Bush Helzberg. “He was intellectually stimulating, fully researched and versed on his questions and brilliant comments, witty, and generously gave praise. He was a true Renaissance man who was always thoughtful and I looked forward to our meetings and discussions. Many of his suggestions will be his legacy. I will miss him greatly.”

“Kenny and I co-chaired the Development Committee, served on the Finance Committee, and were Trustees together for 15 or so years,” said Paul DeBruce. “I loved the way Kenny would challenge me to think about alternative ways to view different issues. He was very passionate about the Nelson-Atkins and that came through clearly in his participation and energy on behalf of the museum. I have always tried to emulate that same passion and energy.”

Mr. Baum was born July 6, 1930, in Kansas City, and studied history at Carleton College in Northfield, MN. He began working at George K Baum & Company immediately after he graduated in 1952 and eventually led the company for more than 40 years. The business focused on municipal bonds and sales, and Mr. Baum grew it to include underwriting of corporate equity securities. The firm joined the New York Stock Exchange in 1970. Mr. Baum’s son, Jon, joined the firm in 1991 and acquired the company in 1994.

At the time of his death, Mr. Baum served as a member of these civic organizations: the Board of Trustees of the Kansas Chapter of The Nature Conservancy; President and Director of Blue River Land Trust; University of Missouri-Kansas City Trustees Emeritus and is a Trustee of the George K. Baum Family Foundation. He has previously served on the Board of Directors of Jewish Heritage Foundation, Kansas City Economic Development Council, the New Reform Temple, Menorah Medical Center, and as Chairman of the Board of Trustees of UMKC.

He served on the Regional Firms Advisory Committee to the New York Stock Exchange. He has also served as a member of the Board of Directors of the National Association of Securities Dealers and as Chairman of the Nominating Committee of the local district of that organization; Chairman of the local district Investment Bankers of America; Governor, National Association of Investment Bankers of America; and Governor, Security Investors Association.

The Baums founded the G. Kenneth Baum and Ann Baum Philanthropic Fund, which provided grants to Kansas City organizations to promote education, arts, the humanities, and prevention of cruelty to children and animals. 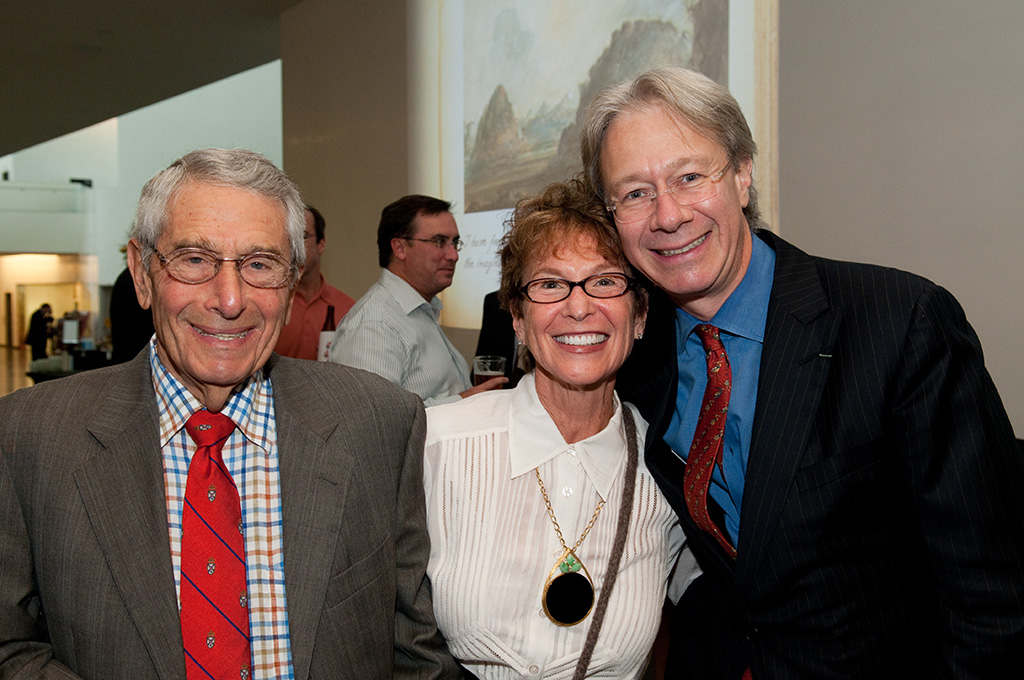 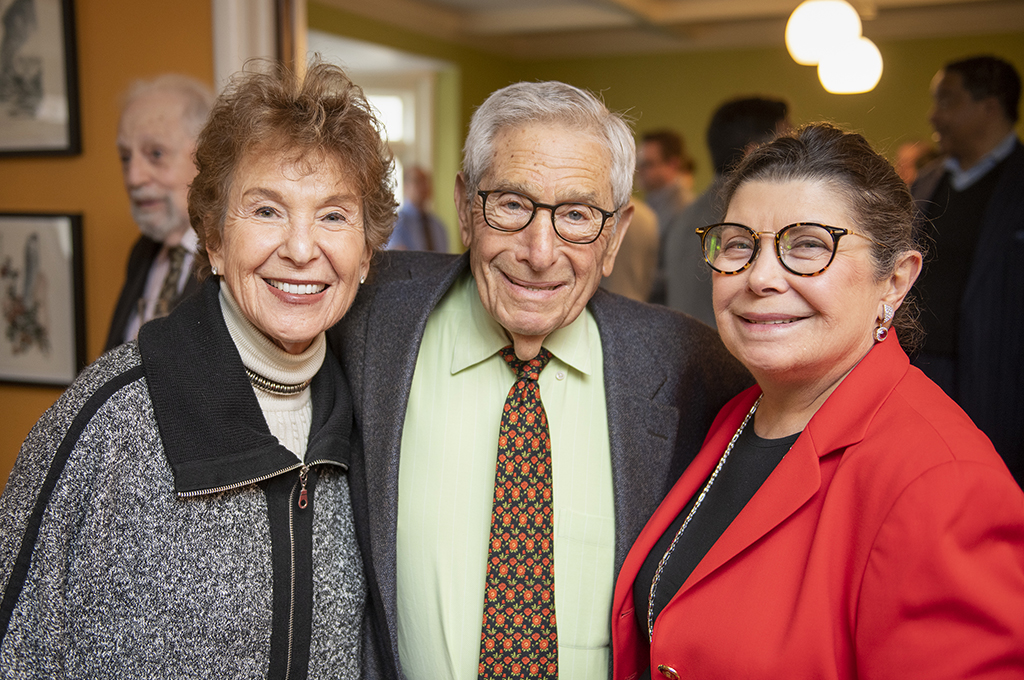 Ann and Kenny Baum (left and center) with former Board Chair Shirley Bush Helzberg, in 2019. Photo by Mark McDonald. 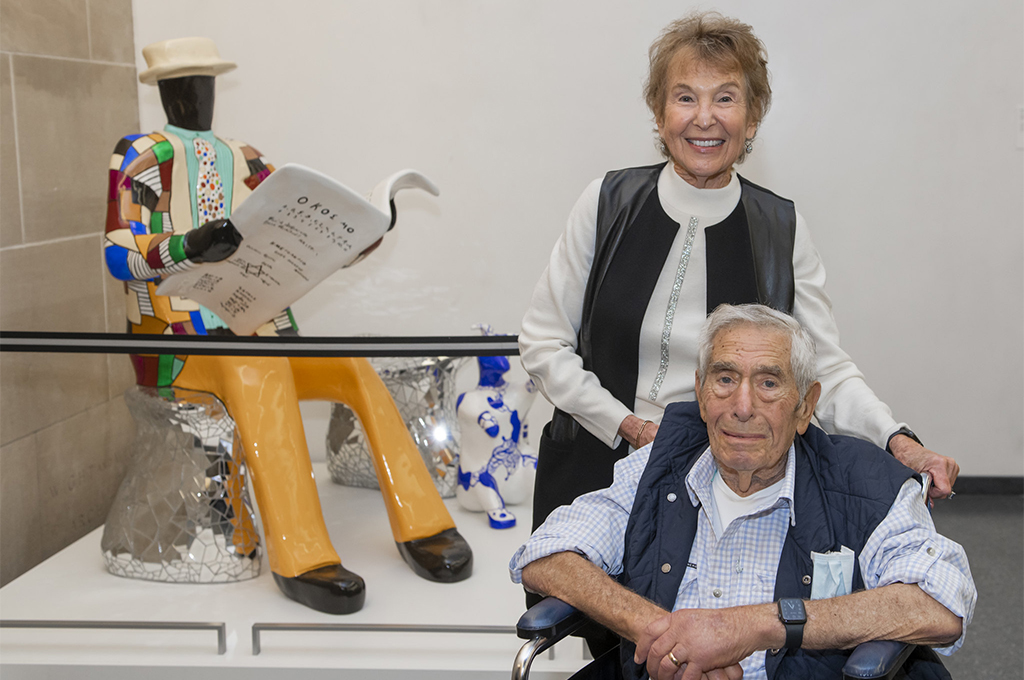 At a reception in October, the museum celebrated Kenny’s recent gift of a sculpture in honor of his wife, Ann. Photo by Mark McDonald.