Kansas City, MO. Sept. 5, 2018– Napoleon: Power and Splendor marks the first examination of the majesty and the artistic, political and ideological significance of Napoleon’s imperial court, from Napoleon’s coronation in 1804 to his final exile in 1815. The exhibition opens at The Nelson-Atkins Museum of Art in Kansas City Oct. 26 and aims to capture the spirit that prevailed in the French imperial court and to recreate the sumptuous ambiance of Napoleon’s reign.

A selection of more than 200 works, most of which have never before been exhibited in North America before this tour, will reveal the power and splendor of the Imperial Household and its role in fashioning a monarchic identity for the new emperor, his family and loyal entourage. The exhibition is organized and circulated by the Montreal Museum of Fine Arts (MMFA) with the participation of the Nelson-Atkins, the Musée national du château de Fontainebleau, and the Virginia Museum of Fine Arts. It was curated by Sylvain Cordier, Curator of Early Decorative Arts at MMFA.

“I find it extraordinary that 200 years after his demise, the geopolitics of our world bear so much of Napoleon’s legacy,” said Julián Zugazagoitia, Menefee D. and Mary Louise Blackwell CEO & Director of the Nelson-Atkins. “He emerged from the French Revolution and fought to impose his order on the rest of the world until his bitter end. The fact that his story resonates and fascinates today reflects his talent in harnessing the arts and the power of images.”

The Imperial Household was a key institution during Napoleon’s reign. It included 3,500 members in its retinue who were responsible for managing the daily lives of the imperial family and the day-to-day existence of former general Bonaparte, who became Emperor Napoleon in 1804. They also helped craft Napoleon’s image as Emperor and modern hero.

Napoleon’s household relied on complex everyday functions in which the Emperor himself played an integral part. The exhibition installation will follow the six departments that made up the Imperial Household including the grand equerry, grand master of the hunt, grand chaplain, grand marshal of the palace, grand master of ceremonies, and the grand chamberlain. 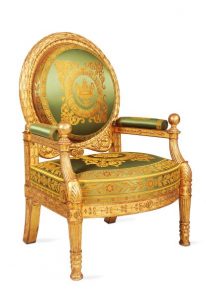 Interpretive elements throughout will unpack for visitors the socio-historical significance of the household’s functions. Innovative scenography re-creates the splendor of palace life. The integration of immersive projection technologies will further enhance the spectacle and provide salient historical, cultural, and personal context that is immersive and engaging.

“The rich collection of objects that form this exhibition highlights the degree to which Napoleon harnessed the arts not only to strengthen his image, but also to bolster the French economy,” said Aimee Marcereau DeGalan, the Louis L. and Adelaide C. Ward Senior Curator of European Arts. “More than anything, this exhibition provides a portal into the exquisite breadth and level of skill of the artists and artisans in Napoleon’s employ.”

Napoleon: Power and Splendor brings together nearly 200 works of art. They are featured thanks to more than 40 distinguished lenders, including such institutions as the Louvre, the Château de Fontainebleau, the Mobilier national de France, the Musée national des châteaux de Malmaison et de Bois-Préau, the Metropolitan Museum of Art, the J. Paul Getty Museum, the Museum of Fine Arts, Houston, and the Art Institute of Chicago.

Napoleon: Power and Splendor offers a unique opportunity to discover paintings, sculptures, furniture, silver and porcelain, tapestries, silk hangings, and court dress illustrating the opulence characteristic of the Empire in service of Napoleon’s spectacle of power.

The exhibition closes at the Nelson-Atkins March 10, 2019. It can be seen at Musée national du Château de Fontainebleau in France from April 13–July 15, 2019.

Napoleon and the Imperial Household: Art and Culture in Support of Power

Dr. Mark Gerges, associate professor at the U.S. Army Command and General Staff College, will speak to how Napoleon changed France and molded a modern Europe; his Imperial Household, responsible for the daily lives of the Imperial family, facilitated Napoleon’s ability to rule an empire that spanned Europe and contributed to his continuing legacy.

Hear from Dr. Aimee Marcereau DeGalan, Senior Curator of European Arts at the Nelson-Atkins, how Napoleon harnessed fashion not only to bolster the French economy, but also to legitimize his reign. During the Napoleonic era, the clothing of men, women and children acquired a social, cultural, and economic importance that it never before had in the history of the Western world.

Dr. Kathryn Galitz from the Metropolitan Museum of Art discusses how Gérard’s ascent as a portraitist coincided with Napoleon’s rise to power at the end of the eighteenth century.  As Emperor, Napoleon exploited the propagandistic power of art, and Gérard’s portraits of Napoleon and his family shaped Napoleon’s imperial image.

The Students are IN!

University students from the honors college at University of Missouri-Kansas City will be stationed throughout the exhibition to discuss connections between the artworks you see on display and French literature selections.

Your not-so-quiet night at the museum! Honoring the spirit of Napoleon and 1800 France, November’s Third Thursday includes exhibition-related activities, performances, and more.

Get a diva’s eye view of the world of opera during the reign of Napoleon.

In 1800 France, the “six degrees of separation” game might well have been played surrounding the opera singer, Giuseppina Grassini. Lover to both Napoleon and his nemesis, the Duke of Wellington, this star of the operatic stage was also the aunt of two operatic superstars, the Grisi sisters, and is part of a lineage that extends to Maria Callas and beyond. We’ll connect the past to the present via vocal excerpts performed by the Lyric Opera of Kansas City Resident Artists, and view portraits of the major players that helped shape Operatic and Napoleonic worlds.

In partnership with the Lyric Opera of Kansas City.

For Love of Music: Napoleon and the String Quartet

While Napoleon was famed for his military prowess, he was an ardent admirer of music, from oldies to popular songs to his contemporary composers like Giovanni Paisiello and Niccolò Antonio Zingarelli.

In partnership with the Kansas City Symphony.

Ridley Scott’s directorial debut tells the tale of two French officers engaged in 16 years’ worth of grudges and duels, set against the backdrop of the Napoleonic era. Based on the Joseph Conrad short story The Duel, which in turn was based off two real French officers in Napoleon’s Army, The Duellists was celebrated for its historical accuracy regarding the Napoleonic uniforms, military conduct, and early-19th-century fencing techniques. Immerse yourself in a rivalry for the ages.  1977 | PG | 100 min.

The Count of Monte Cristo

Based on the novel of the same name by Annemarie Selinko, this film tracks the evolution of Désirée and Napoleon’s relationship, from his rise through the military ranks, their separation as they go on to marry others, and their paths crossing once again towards the end of reign.  1954 | NR | 110 min.

Napoleon: Power and Splendor is organized, produced and circulated by The Montreal Museum of Fine Arts with the participation of Château de Fontainebleau and the exceptional support of Mobilier national de France, in collaboration with The Nelson-Atkins Museum of Art.