Kansas City, MO. April 12, 2022– For American photographer Jim Dow, a road trip was not just an excuse to travel from one place to another; it provided an opportunity to find inspiration in the unique structures lining old U. S. highways. Between 1967 and 1977, a decade marking the first ten years of his career, Dow traveled over 150,000 miles on multiple cross-country road trips, photographing vernacular architecture, signage, and commercial billboards that conveyed a unique sense of human spirit and industry. A new, free exhibition at The Nelson-Atkins Museum of Art in Kansas City, Signs: Photographs by Jim Dow, draws visitors into Dow’s fascination with the everyday structures that constitute the landscapes we inhabit.

“Although most of Dow’s subjects have long since disappeared, the impetus to make one’s mark on the land through an assertion of livelihood, values, and aspiration remains,” said Julián Zugazagoitia, Menefee D. and Mary Louise Blackwell CEO & Director of the Nelson-Atkins. “There will always be a desire to express individual agency and creativity, and Dow’s photographs remind us that as difficult as that may be, it remains vital for understanding ourselves and our community.” 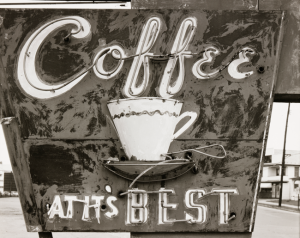 Signs: Photographs by Jim Dow opens May 7 and features 62 black-and-white photographs from the early part of Dow’s career, as well as a small selection of recent color photographs that extend the themes forged during his formative years.

“Dow travelled on back roads rather than the interstate system,” said April M. Watson, Senior Curator of Photography. “He always sought unusual or unique subjects that stood apart from the corporate chains that had begun to dominate the social landscape, often isolating specific details so they appear unmoored from their immediate surroundings.” 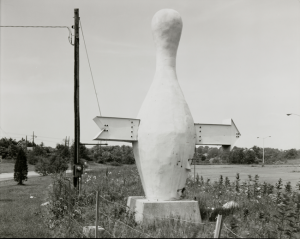 Born in 1942, Dow grew up in Belmont, Massachusetts and attended the Rhode Island School of Design. As an undergraduate, he majored in graphic design, and in his senior year, had the good fortune to take his introductory photography classes with renowned photographer Harry Callahan. Thanks to Callahan’s influence, Dow was able to continue graduate studies at RISD, completing his MFA in photography in 1968.

A meeting with Walker Evans while Dow was in graduate school made a profound impact on him. Dow found Evans’s sophisticated embrace of vernacular American subject matter and straightforward, descriptive application of the medium to be revelatory. Between 1969 and 1971, he worked closely with Evans when printing Evans’s work for a career retrospective at the Museum of Modern Art in New York. In the late 1960s, Dow began searching for his own subject matter, taking numerous road trips. Roadside diners, drive-in movie theatres, ice cream stands, burger joints, billboards, gas stations, and small-town, storefront murals all became part of Dow’s regular roster of subjects, as he refined his own artistic vision.. Grants from the National Endowment for the Arts in 1973, and a Guggenheim Fellowship in 1974 allowed Dow to continue his project.

This exhibition is accompanied by a fully illustrated catalogue with essays by Dow and Watson, distributed by Yale University Press. Signs: Photographs by Jim Dow runs through Oct. 9, 2022.

This exhibition was organized by The Nelson-Atkins Museum of Art.