Kansas City, MO. Nov. 27, 2017–Eugene Richards’s photographs speak to the most profound aspects of human experience: birth, death, and human resilience amidst dire circumstances. Unflinching yet poetic, Richards’s photographs are firmly rooted in the texture of lived experience. The first retrospective museum exhibition highlighting his internationally renowned career, Eugene Richards: The Run-On of Time, features 130 photographs and opens at The Nelson-Atkins Museum of Art in Kansas City Dec. 9. The exhibition was co-organized by the Nelson-Atkins and the George Eastman Museum and runs through April 15, 2018. 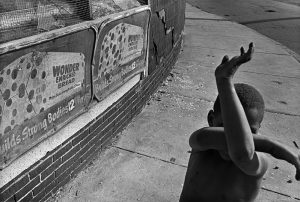 “Eugene Richards confronts challenging subjects with an impassioned honesty that is at once controversial, lyrical, beautiful and melancholy,” said Julián Zugazagoitia, Menefee D. and Mary Louise Blackwell CEO & Director of the Nelson-Atkins. “His photographs illuminate aspects of society that might otherwise remain hidden in plain sight.”

Co-curated by Nelson-Atkins Photography curator April M. Watson and Lisa Hostetler, Curator in Charge of the Department of Photography at the George Eastman Museum, this exhibition provides a complete understanding of Richards’s career, which is deeply informed by his dedication to social and economic issues.

“Richards places his trust, first and foremost, with his subjects–people who have often led difficult and complicated lives,” said Watson. “He gains their trust, getting to know their experiences of hardship and resilience, hope and despair. From that place of knowledge, as truthfully as he can, he tells their stories.”

Born in Dorchester, Massachusetts to working-class parents, Richards came to photography in the context of the Vietnam War and the civil unrest of the mid- to late 1960s. In 1967, after refusing the draft on moral grounds, Richards studied photography with Minor White at Massachusetts Institute of Technology, where he learned the techniques of large format photography and the rewards of close observation. In 1969, he joined VISTA (Volunteers in Service to America), working as a healthcare advocate in rural Arkansas and photographing the people he came to know there. In 1970, he helped found Respect, Inc., a private, non-profit social advocacy agency. 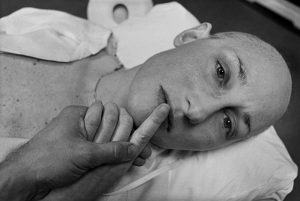 For much of his career, Richards has worked as a photojournalist: he has been a member of the esteemed photo collective Magnum, and worked independently on assignments, many of which have led to expanded, personal book projects that include first-person texts culled from interviews with his subjects. Other projects have been entirely self-driven. This exhibition weaves together selections from each of his major published projects, as well as previously unpublished work. It highlights recurrent themes: the political, social, and economic realities that shape people’s lives, the strength of familial devotion, and the impact of time and memory on the way we understand personal and societal change.

Eugene Richards: The Run-On of Time is accompanied by a catalogue with essays by each of the curators, published by the Hallmark Family Foundation in association with the Nelson-Atkins and the George Eastman Museum, distributed by Yale University Press.

This exhibition is co-organized by The Nelson-Atkins Museum of Art and the George Eastman Museum, Rochester, New York. In Kansas City, the exhibition is supported by the Hall Family Foundation and the Campbell-Calvin Fund.

Special programs for this exhibition:

Eugene Richards: In Photo and Film

To mark the opening of the exhibition, join the photographer for a screening of a selection of his short, documentary films. A Q&A with Richards will follow.

Eugene Richards will speak about his career and the powerful works in this retrospective exhibition. A book signing will follow.

The Making of an Exhibition

Eugene Richards: The Run-On of Time

How does an art museum present potentially challenging subject matter?  Hear from the Nelson-Atkins team who shaped the exhibition, Eugene Richards: The Run-On of Time. Moderated by Suzetta Parks, a participant of the community input group for this exhibition.

The Curator is IN!

Join curator April M. Watson for a thoughtful conversation about works in the exhibition.

Engage in this film-and-dialogue series featuring movies and documentaries that spotlight challenging issues, followed by a conversation between film scholars, subject experts and audience members.

March’s theme compares and contrasts the effects and aftermath of the 1980s War on Drugs—poignantly captured in Eugene Richards’s photographs–with today’s opioid and prescription drug crisis.