Eight prints by Spanish artist Francisco José de Goya y Lucientes (1746–1828) are paired with works by contemporary American artist Enrique Chagoya (born in Mexico City, 1953). At first glance, Chagoya’s prints may appear to be direct copies, but take a closer look. Chagoya has updated the players in each of the narratives.

Goya was a court painter to the Spanish Crown and a keen observer and chronicler of his time. In 1799, he published a series of eighty prints, Los Caprichos (the follies or foibles) that presented witty, bitter critiques of Spanish society. His prints satirized greed, ignorance, flattery, evil, deceit, abuse of power, and other human vices. Goya hoped his art would lead “the mind through the night of human absurdity to the daylight of reason.”

Two hundred years later, in 1999, Chagoya issued a series of prints entitled Return to Goya. These images suggest that the dramas and injustices of 1700s Spain persist. In Chagoya’s view, politics is still rife with corruption, greed still dictates personal interactions, and those in power still prey on the disadvantaged. 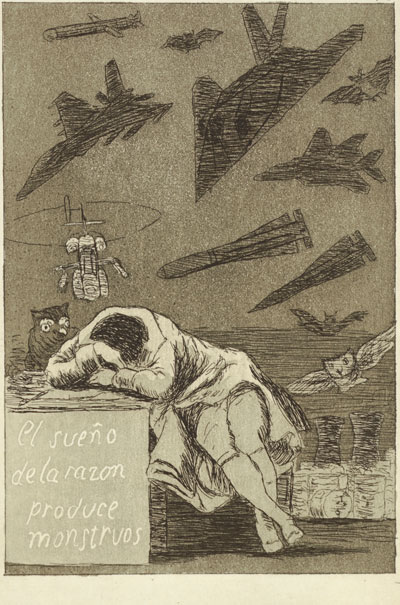 Organized by The Nelson-Atkins Museum of Art