Listen to selections from Gordon Parks’s public talk at the Nelson-Atkins in 1994, as the artist reflects on growing up in Kansas, facing racism, and his determination to turn his frustration into creation. This audio is also available in the exhibition through the Smartify app.

Parks, Gordon. Lecture in conjunction with the exhibition “Songs of My People.” The Nelson-Atkins Museum of Art, March 27 – May 29, 1994

These encounters framed a critical passage in the career of the controversial heavyweight, whose antiwar and black separatist views had led to widespread vilification in the United States. They also marked a significant moment of transition for Parks, then following up his remarkable success in photojournalism with new projects as an author, filmmaker and composer.

Despite their generational and ideological differences, Parks and Ali respected and admired one another. As celebrated figures, both men shared a common struggle as they faced prejudice and bigotry in their fight for social justice and civil rights in the public eye.

Significantly, Parks and Ali well understood the power of the media to shape public opinion. Parks’s position at Life gave him a vast and influential platform, which he used to craft a sympathetic image of the controversial young champion.

The Muhammad Ali whom Life readers discovered through Parks’s photographs in 1966 and 1970—the athlete, private man, controversial figure of politics and religion, and cultural icon—was, it later emerged, standing at an important crossroads in his own inspiring evolution. Parks’s photographs capture this important early chapter in the life of the fighter we still call “the greatest of all time” as he confronted his challenges, inside and outside the ring.

For groups interested in learning more about the artwork on view in this exhibition, please request a Photography Collection tour.

Organized in collaboration with The Gordon Parks Foundation, this exhibition features approximately 55 photographs, many never before published.

This exhibition will be accompanied by the publication Gordon Parks X Muhammad Ali, published in collaboration with the Gordon Parks Foundation and printed by Steidl. The book includes a foreword by Julián Zugazagoitia, Menefee D. and Mary Louise Blackwell Director & CEO of the Nelson-Atkins, and Peter W. Kunhardt, Jr.; and essays by Kareem Abdul-Jabbar, Gerald Early, and April M. Watson. 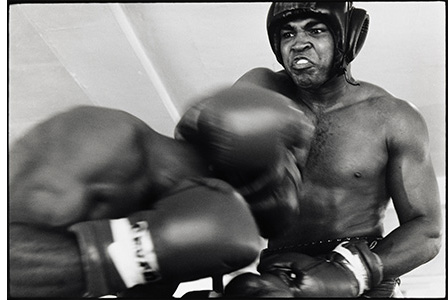 This exhibition is organized by The Nelson-Atkins Museum of Art in collaboration with The Gordon Parks Foundation. In Kansas City, the exhibition is supported by the Hall Family Foundation and Elizabeth and James E. C. Tinsman.