Where does myth stop and reality start? In the minds of ancient Greek people, myth and history were intertwined. They built their perception of the world on mythology (from the Greek word mythos for story-of-the-people, and logos for word or speech, so the spoken story of a people). Thus, to the people who owned and used these objects, the stories depicted on these vases had relevance in everyday life, as fantastical as they may seem to us today.

Vase decoration provides us a view into their lives and values, but these scenes are not to be taken at face value. Often, they blur the boundaries between myth and life. This 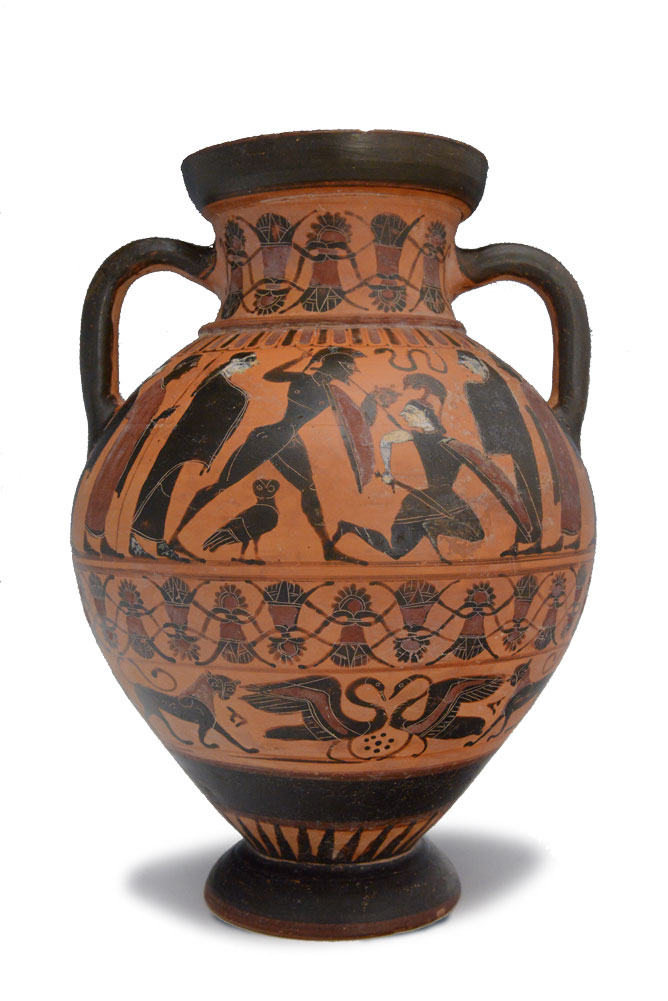 blurring offered the Greeks an opportunity to test the boundaries between men and women, human “reality” and the not-quite-human world of myth.

The nearly forty ancient Greek vases on display range from 850 to 300 B.C.E. It was a time when borders of the empire were shifting, with influence extending all the way from Egypt and the Near East to modern-day Italy. Arranged by themes still recognizable to us today including love, drink and merriment, athletic competition and combat, and death and the afterlife, the objects and their stories show that even across centuries, mythology remained persistent in ancient Greek life.

All vases come from the collections of Joslyn Art Museum in Omaha, Nebraska, one of the most distinguished Midwestern groups of Ancient Greek pottery. These vases are a special loan to The Nelson-Atkins Museum of Art while Joslyn is closed for a major expansion.

Organized by The Nelson-Atkins Museum of Art