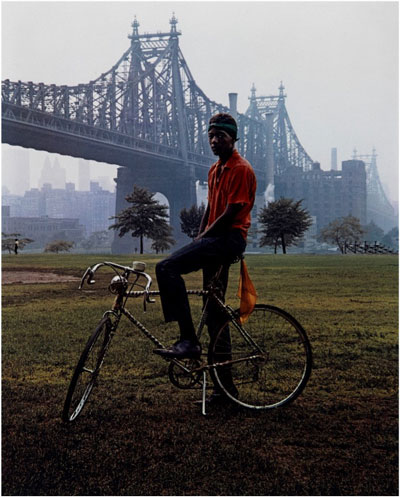 City is the first major museum exhibition in the United States in over 50 years for Hofer, a highly innovative photographer whose pioneering work spanned five decades but remained under recognized in her lifetime. The exhibition focuses on her series of widely distributed photobooks devoted to European and American cities, published throughout the 1960s, and it will feature more than 100 vintage prints in both black and white and color from those publications. The works are drawn exclusively from the artist’s estate and the collections of the High and Nelson-Atkins. After its presentation at the High (March 24-Aug. 13, 2023), the exhibition will travel to the Nelson-Atkins, where it will be on view September 16, 2023-February 11, 2024.

“We are delighted for the opportunity to present these photographs together for the first time at our institutions and to highlight Hofer’s important artistic contributions, including as an early adopter of color photography,” said Julián Zugazagoitia, Menefee D. and Mary Louise Blackwell Director & CEO of the Nelson-Atkins.

“Both the High and the Nelson-Atkins have highly esteemed photography programs, and significant holdings of Hofer’s work,” said Rand Suffolk, the High’s Nancy and Holcombe T. Green, Jr., director.

Born in Germany in 1922, Hofer left with her family for Switzerland in 1933 in response to the rise of fascism, settling first in Geneva, where as a teen she studied photography with Hans Finsler, a pioneer of the “new objectivity” movement. After time in Madrid, the family moved to Mexico, where Hofer worked briefly as a professional photographer. In 1946, she arrived in New York, where she worked with art director Alexey Brodovitch to produce photo essays for Harper’s Bazaar. She quickly expanded her practice and became an acclaimed editorial photographer.

Though celebrated for her editorial work, Hofer never received wide acclaim, due in part to her unique style and methods. New York Times art critic Hilton Kramer notably referred to her as “the most famous unknown photographer in America.”

“Hofer wanted to get under the skin of a city, to picture the essential character of a place and its people,” said April Watson, Senior Curator, Photography at the Nelson-Atkins and co-curator of the exhibition.

“At a time when spontaneous black and white pictures were the hallmarks of avant-garde photography, Hofer favored cumbersome large-format cameras and embraced color materials,” said Greg Harris, the High’s Donald and Marilyn Keough Family curator of photography and co-curator of the exhibition.

Hofer ultimately made her greatest impact through the photobooks featured in Eyes on the City, which include The Stones of Florence (1959), London Perceived (1962), New York Proclaimed (1965), The Evidence of Washington (1966), and Dublin, A Portrait (1967). Produced in collaboration with notable writers such as V.S. Pritchett, Mary McCarthy, and William Walton, the books combined landscapes and architectural views with portraiture and convey the unique character and personality of these urban capitals during a period of intense structural, social and economic transformations after the end of World War II. The photographs also reveal Hofer’s exquisite sensitivity to the impact of place, environment, and situation (including class, race, gender, and generation) on the lives of individuals from all walks of life. Eyes on the City will include prints from each of her city photobooks along with select works from The Presence of Spain (1964), a collaboration with writer Jan Morris, and an unrealized publication on Paris (1967), along with manuscripts and archival documents.

The exhibition and accompanying catalogue offer new scholarship about Hofer’s understudied practice, tracing the early development of her career; the exchanges between her editorial and fine artwork; her mastery of color and her contribution to the history of 20th-century photographic portraiture; the nature of her intense collaborations with writers; and the ways her photographs intersected with emerging discourses and practices around post-war urban planning. In addition to essays by Harris and Watson, the catalogue will feature a contribution by UC Berkeley Associate Professor of Geography Brandi Thompson Summers.

This exhibition is co-organized by The Nelson-Atkins Museum of Art and the High Museum of Art, Atlanta. Generous support in Kansas City has been provided by the Hall Family Foundation.