Kansas City, MO. Jan 24, 2019– Acclaimed artist Andy Goldsworthy, who works with nature and time to create site-specific installations, will build Walking Wall in five successive sections at The Nelson-Atkins Museum of Art in Kansas City in 2019. Over a period of five installments, the wall will literally move from the east part of the museum to its final resting place inside and outside the Bloch Building lenses.  The stone wall will fulfill Goldsworthy’s long-held vision of creating a wall that inches its way through a place. Walking Wall will move from a five-acre piece of land east of the museum, onto the museum campus, and ultimately into the museum, drawing its way through the museum’s campus. 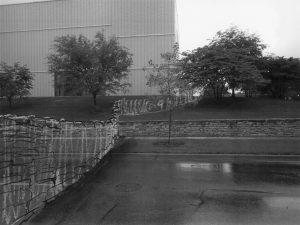 Walking Wall would connect the inside of the Museum to the outside, but just as importantly it would enact on its own terms the literal and figurative journey that almost every object in the museum will have made before entering the collections there.  -Andy Goldsworthy, Proposal 2018

Walking Wall continues Goldsworthy’s longstanding investigation into wall making; their index of passing time, their inherent association to boundaries and the differences and dialogues between British and American doctrines to these boundaries, and their ability to reflect on permanence and the transient.  His first wall, ‘Give and Take Wall’, 1989, was made in response to a contractual need to establish a boundary between two fields in Scotland near to where the artist lives. The resulting wall was an expression of exchange and cooperation.  In 1990 he constructed a wall in Cumbria, England that became locally known as the ‘Wall that went for a walk’ – a reference to the poem Wall by Cumbrian poet Norman Nicholson which reads, in part: 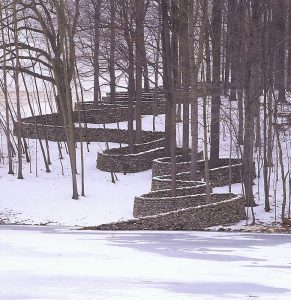 These words have become connected to many of Goldsworthy’s works and specifically to stone walls including one of his largest public installations to date, the iconic Storm King Wall, a 2,278-foot wall that snakes through the Storm King Art Center in New York.

The origin of the proposal for Walking Wall developed from Goldsworthy’s observation of the volume of walls in Kansas City.  William Rockhill Nelson is said to have built “miles” of rock walls, and he chose to use native limestone quarried on his property for Oak Hall, the site where the Museum now sits.

Goldsworthy’s search for suitable stone for building Walking Wall led him to the Flint Hills where there is a history of quarrying limestone as well as the making of drystone walls. He had used Flint Hills Stone for a previous project in Wichita but was not aware of the prairie walls until his recent visit. Initially intending to use freshly quarried stone, Goldsworthy realized that they would look disconnected to the weathered walls around the museum. As a result, Walking Wall will contain a proportion of fresh stone but will mainly consist of weathered material left over from old quarries,  old stone picked directly from the field, and old walls that were in the process of being torn down. 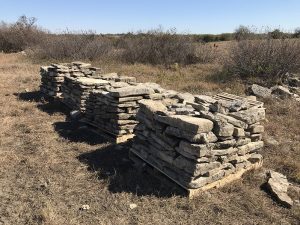 “I want Walking Wall to feel connected to other walls in the vicinity of the Nelson-Atkins,” said Goldsworthy. “The walls of the museum are a patchwork of different states of weathered stone, which will allow me to mix freshly quarried stone into the wall. Traveling to the Flint Hills to find the right stone for this project was an extraordinary process that made a deep impression on me.”

Two Wallers from the United Kingdom (one of whom worked on the Storm King Wall), supported by U.S. assistants, will build the wall under Goldsworthy’s direction. The first section will be made in Spring 2019, and stones within that section will be moved to create the second section, culminating in the fifth and final section that will be complete in Fall 2019.  The work will begin on museum property that is just east of the museum. It will cross Rockhill Road and will require the closing of the road for three to four weeks, in cooperation with the Parks and Recreation Department of Kansas City.  The public will be allowed to watch the construction of the piece from a distance, allowing the viewer to see boundries cut across rather than created.

“This seemingly simple wall presents conceptual, philosophical, spiritual, and practical challenges that are both enriching and exciting,” said Julián Zugazagoitia, Menefee D. and Mary Louise Blackwell CEO & Director of the Nelson-Atkins. “This poetic disruption pushes the boundaries of a city and nature and solidifies the tie between the museum and the neighborhood.”

The installation has been commissioned by the Hall Family Foundation in honor of Estelle and Morton Sosland and their passionate and longstanding commitment to the arts in Kansas City. The Soslands originally commissioned the Shuttlecocks, which have become icons for Kansas City. The four Shuttlecocks, by artists Claes Oldenburg and Coosje Van Bruggen, were installed in the midst of great controversy in 1994.

“The Hall Family Foundation is pleased to honor Morton and Estelle Sosland with this exciting addition to the sculpture park,” said Donald J. Hall. “The Soslands have been supporters of the museum in general and the sculpture park in particular.  From the initial idea for the park, to the design, to acquisitions, and to their gift of the iconic Shuttlecocks, they have supported the park in numerous ways. Adding the Andy Goldsworthy piece that they chose in close dialogue with the artist will be an appropriate ‘thank you’ for all they have done.”

A commissioned piece by Andy Goldsworthy is considered a triumphant addition to the Sculpture Park.

Goldsworthy was born in Cheshire, England, in 1956, and is now based in Scotland.  Over his diverse career he has become known for creating works in both urban and rural locations using materials at hand – leaves, sticks, stones, even petals and ice. Many of his projects are transient or ephemeral in nature, although he captures the moment with photographs. Other projects are meant to be in place for many years, although Goldsworthy has a continual interest in the changes of time due to nature’s effects or the passing of time. 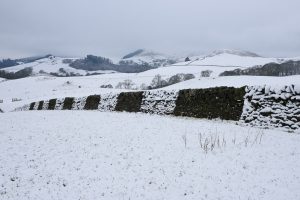 “Each project subjects Goldsworthy’s ideas about the work to the brute facts of natural forces: sunlight, sedimentation, tides, erosion, extremes of heat and cold, and growth and decay,” reads the introduction to his book Andy Goldsworthy: Projects. “…the hard-won simplicity of each project is underscored by a complex thought and construction process.”

His projects can be found worldwide, from the United States to Australia.  Projects include Roof, nine stacked-slate domes in the East Building of the National Gallery of Art in Washington, D.C., Stone Sea, arches of stone at the Saint Louis Art Museum, and Drawn Stone, a commissioned work in the entry courtyard of San Francisco’s De Young Museum, among many others.  Goldsworthy is represented by Galerie Lelong & Co. In 2021 a traveling retrospective of his work will open at the Yale Center for British Arts.

Ice. Rolled and rounded by the river. Made into a wall. Dumfriesshire, Scotland. 9 January 2011, ©️ Andy Goldsworthy

The Nelson-Atkins serves the community by providing access to its renowned collection of more than 41,000 art objects and is best known for its Asian art, European and American paintings, photography, modern sculpture, and new American Indian and Egyptian galleries. Housing a major art research library and the Ford Learning Center, the Museum is a key educational resource for the region. In 2017, the Nelson-Atkins celebrates the 10-year anniversary of the Bloch Building, a critically acclaimed addition to the original 1933 Nelson-Atkins Building.