Antebellum Image Believed to be First of its Kind

Kansas City, MO. Nov. 21, 2019–A quarter plate daguerreotype believed to be the earliest known image of African American slaves with cotton was purchased by the Hall Family Foundation on behalf of The Nelson-Atkins Museum of Art late last week. 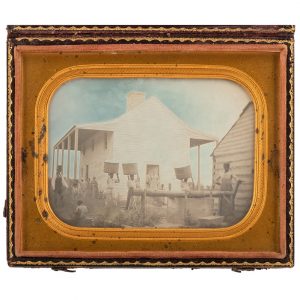 “This important acquisition makes a major contribution to the larger story of American history and American photography,” said Julián Zugazagoitia, Menefee D. and Mary Louise Blackwell CEO & Director of the Nelson-Atkins. “We are incredibly honored that this previously unknown image will join our robust daguerreotype collection, with deep gratitude to the Hall Family Foundation for its generosity and foresight.”

“Our collection of 19th-century American photographs is a key facet of our overall photography holdings, and we have had a particular interest in American daguerreotypes (the earliest successful photographic process) since 1995,” said Keith F. Davis, Senior Curator, Photography. “The history that these varied images record is complex, sometimes painful, and often surprising. All of these works are vital to a richer understanding of both the American experience and the achievements of American photographers.”

The photograph was likely taken some time during the 1850s and is believed to depict the rural Greene County, Georgia plantation of Samuel T. Gentry. This makes it all the more unusual, since most images taken of enslaved African Americans were taken at large coastal plantations. While the photographer is unknown, it is probable that Gentry commissioned the photograph to document his prosperity.

“This piece—a record of the historical crime of slavery—is remarkable both for the power of its content and for its technical and aesthetic sophistication,” said Davis. “This is an unforgettable rendition of an era, and a way of life, that must never be forgotten or forgiven. At the same time, it markedly expands our understanding of the history of American photography. We have long believed that daguerreotypes such as this ‘should’ have been made in the 1850s; now we know that at least one actually was.”

“Our daguerreotype holdings have particular strength in abolitionist material—Frederick Douglass, Harriet Beecher Stowe, and Lucretia Mott are just a few examples,” said Jane Aspinwall, Curator, Photography. “This rare and exceptional work adds importantly to a vital part of the museum’s collection. We have mounted and traveled several daguerreotype exhibitions in the past 15 years, and our major new exhibition–Golden Prospects: California Gold Rush Daguerreotypes–is on view at the Nelson-Atkins through Jan. 26, 2020, with two other venues to follow. Our program is dedicated to enlarging our collective understanding of 19th-century history and photography through this most remarkable of photographic processes: the daguerreotype.”

Image caption: A Rare Antebellum Image of Slavery in Georgia, Believed to be the Earliest Known Image of Enslaved African Americans with Cotton

The Nelson-Atkins serves the community by providing access to its renowned collection of more than 42,000 art objects and is best known for its Asian art, European and American paintings, photography, modern sculpture, and Native American and Egyptian galleries. Housing a major art research library and the Ford Learning Center, the Museum is a key educational resource for the region. In 2017, the Nelson-Atkins celebrates the 10-year anniversary of the Bloch Building, a critically acclaimed addition to the original 1933 Nelson-Atkins Building.