Kansas City, MO. Nov.14, 2022– An exhibition of Alberto Giacometti (1901-1966), widely acclaimed as a defining artist of modernism and of the 20th century, opens at The Nelson-Atkins Museum of Art in Kansas City March 18, 2023. Alberto Giacometti: Toward the Ultimate Figure explores the central focus of the artist’s oeuvre: his extraordinary and singular portrayals of the human figure. The creative process that led to Giacometti’s figures will be considered through the artist’s work in sculpture, painting, and drawing. Showcasing Giacometti’s major achievements during the post-WWII years, the exhibition is the first major retrospective of the artist’s work in the Midwest.

“The exploration of a body and its placement in space constitute essential questions Giacometti confronted in his continuous struggle with matter,” said Julián Zugazagoitia, Menefee D. and Mary Louise Blackwell CEO & Director of the Nelson-Atkins. “His delicate works are inspired and nourished by his intense, lifelong study of art history, particularly that of ancient civilizations, which eloquently speaks to his search for the absolute essence of the human form throughout time.”

For Giacometti, the human figure is the essential conveyer of meaning and his figures are instantly recognizable, and therefore universal. His figures are pared down to their essence with simple movements such as standing or walking, allowing the viewer to immediately recognize themselves and connect deeply with the sculptures.

“Because these figures embody the very spirit of humanity, these simple, expressive, powerful forms speak to each of us individually,” said Zugazagoitia. “We often feel fractured within our communities as we search for a connection, passionate in the belief of our identities, so Giacometti’s work universally unites us.”

Thin, elongated bodies, worked out with tormented surfaces, became emblematic of the artist’s mature and late style, leading Giacometti to create iconic human forms rich with philosophical evocations and historic sources, such as The Chariot (1950), owned by the Nelson-Atkins, and the Walking Man (1960). These figures resulted from a long process initiated in the 1920s and ‘30s and adapted after the devastation of the Second World War. Through the study of around 100 objects by Giacometti, the show explores the latter part of the artist’s oeuvre and the creative process that led to its innovative aesthetic. 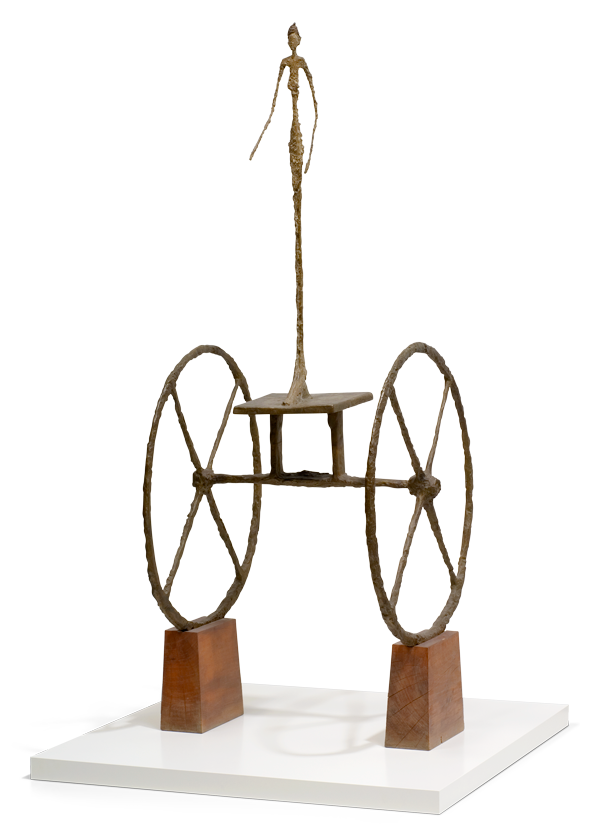 “This sweeping exhibition also examines the role of Giacometti’s family as his principal models,” said William Keyse Rudolph, Deputy Director, Curatorial Affairs. “Giacometti was inspired by those closest to him; and his wife Annette and brother Diego became lifelong collaborators in helping him realize his vision of how the human figure can express both intellect and emotion.”

The exhibition is co-curated by Rudolph and Romain Perrin, associate curator at the Foundation Giacometti in Paris. It begins with a survey of Giacometti’s obsession with the human figure and the slimming of the figure “into thin air.” In addition to sculpture, his exploration of space is considered through the artist’s landscape paintings and the positioning of the artworks in his studio, as well as the creation of environments for his figures through bases and settings. The exhibition highlights the artist’s legendary studio space on the rue Hippolyte-Maindron in Paris as an extension of the artist himself and explores a never-realized commission late in the artist’s career that was a powerful distillation of Giacometti’s now-iconic figures. Interpretive materials will consider how the artist’s abiding interest in the human figure shaped his process and will encourage visitors to see as an artist sees.

Toward the Ultimate Figure is organized in broad thematic sections, revealing how the artist came to find new ways of imagining the human figure in space.

Alberto Giacometti: Toward the Ultimate Figure, which runs through June 18, 2023, is accompanied by a fully illustrated catalogue featuring more than 100 sculptures, paintings, drawings, and prints. It offers a comprehensive survey of the artist’s work, from its beginnings in Stampa to its development in Paris. Essays by scholars of Giacometti and modern art focus on masterpieces such as the Walking Man, the Nose and the Chariot and on key aspects of his work, such as the significance of Surrealism, his drawing practice, and the relationship between forms and space in his sculptures.

“Alberto Giacometti: Toward the Ultimate Figure” is co-organized by the Fondation Giacometti and The Nelson-Atkins Museum of Art.

The following programs have been developed in conjunction with this exhibition. Check the museum website for the latest information and additions.

KC Urban Sketchers
Saturday, May 6, 2023, 10:30AM – 12:30PM
A collaborative program with KC Urban Sketchers. Members of the KCUS Chapter will sketch in the exhibition and throughout the museum, drawing what they see using direct observation. Museum guests will be invited to interact with sketchers.

About the Fondation Giacometti

The Fondation Giacometti is a private foundation recognized as a state-approved institution and created in 2003. It is the universal legatee of Annette Giacometti, the artist’s widow, and owns the world’s largest collection of works by Alberto Giacometti, with nearly 10,000 works and objects that represent the artist’s entire career.

Located in Paris, the foundation is directed by Catherine Grenier, heritage general curator and art historian, and brings together a highly-skilled team in the fields of cultural administration, conservation, art historical research, education, artist’s rights.

Based on this expertise and on its broad collection, the Fondation Giacometti aims to protect, disseminate, and promote the work of Giacometti. It organizes several international exhibitions a year and grants loans in France and abroad. The foundation is also responsible for the authentication committee of Alberto Giacometti’s work and compiles the catalogue raisonné of his work.

The Institut Giacometti is the current exhibition space of the Fondation Giacometti, which is also dedicated to art history research and education.