Ancient Greek Vases on View at Nelson-Atkins Museum of Art

Kansas City, MO. May 24, 2022– A new installation featuring nearly 40 ancient Greek vases from the collection of Omaha’s Joslyn Art Museum will be on view in The Nelson-Atkins Museum of Art’s Rozzelle court balcony in Kansas City beginning this June. The ancient Greeks built their perception of the world on their views of the gods and mythology. Thus, to the people who owned and used these objects, the stories depicted on these vases had relevance in everyday life.

Vase decoration provides us a view into their lives and values, but these scenes are not to be taken at face value.

An example of this was the prevalence of imagery featuring Dionysos, god of wine and fertility. Wine was a central part of Greek life. Celebrated during cultural festivities, wine-induced ritualistic dances, and depictions of drunken revelry, the worship of Dionysos provided a means for people to indulge in behavior normally forbidden. The Joslyn vase that is part of the exhibition was created around 500 BCE and issued a “warning” to the polis, or community structure of ancient Greece, to guard the balance between the wild self and the civilized self.

“It was a time when borders of the empire were shifting, with influence extending all the way from Egypt and the Near East to modern-day Italy,” said Aimee Marcereau DeGalan, Louis L. and Adelaide C. Ward Senior Curator of European Arts. “Arranged by themes still recognizable to us today including love, drink and merriment, athletic competition and combat, and death and the afterlife, the objects and their stories show that even across centuries, mythology remained persistent in ancient Greek life. 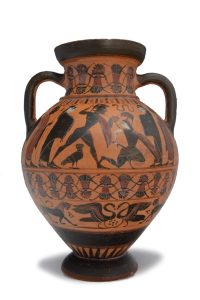 The vases will be on view for nearly 11 months while the Joslyn Museum is under construction.