Mondrian Painting to be Integrated into New Bloch Galleries

Kansas City, MO. Oct 17, 2016–There is perhaps no more fitting tribute to a longtime museum patron’s generosity than the acquisition of a seminal piece of art in his name. The Nelson-Atkins Museum of Art in Kansas City has acquired Piet Mondrian’s important formative painting Stammer Mill with Streaked Sky in honor of Henry W. Bloch, Chair Emeritus of the Board of Trustees of the museum. The painting will join the recent gift of the Marion and Henry Bloch Collection, a transformative gift of Impressionist and Post-Impressionist art, in the newly designed Bloch Galleries, which open in Spring 2017. The acquisition was announced at the 50th anniversary dinner of the Society of Fellows at the Nelson-Atkins Saturday night. 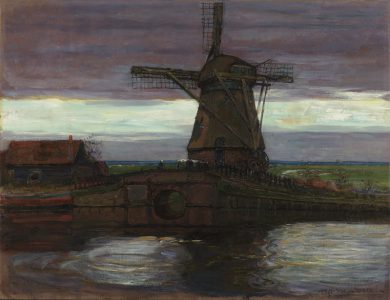 “This is the perfect painting to honor Henry’s extraordinarily generous gift, as it is both a work anchored in the Dutch landscape tradition and highly inspired by the late 19th-century Symbolist tradition,” said Julián Zugazagoitia, Menefee D. and Mary Louise Blackwell CEO & Director of the Nelson-Atkins. “At the same time, it is a work that opens the door to Modernism and its developments, just as many of the paintings in Henry’s collection did. We are so thrilled to have found just the right piece to honor his generosity. This is a painting that would have been right at home with the other masterworks on Henry’s walls.”

When making the announcement, Shirley Bush Helzberg, Chair of the museum’s Board of Trustees, echoed the words of Laurence Sickman, who was the Director of the Nelson-Atkins from 1953–1977 and founded the Society of Fellows.

“We really must continue to buy art. It is absolutely necessary. Collecting is the lifeblood of a museum,” Mrs. Helzberg said. “And what a fitting moment to make this announcement, as the Society of Fellows celebrates 50 years of philanthropy. Each of you are truly vital to the future of this museum.”

Henry Bloch has had a long and distiguished association with the museum for over 40 years. Significant milestones include his founding of the museum’s Business Council in 1985, one of the most successful Business Council of any art museum in the country. He served as Chairman of the Board of Trustees for the Nelson-Atkins from May 2004, to May 2007.  In June 2007, the museum opened the internationally acclaimed Bloch Building expansion, named in honor of Marion and Henry Bloch.

In 2010, the Blochs announced that they would donate their remarkable personal collection of Impressionist and Post-Impressionist paintings to the museum, including works from artists such as Monet, van Gogh, Cezanne, Renoir and Degas.  The collection was officially accessioned into the museum’s permanent collection in July 2015. At the same occasion, the museum began a $12 million renovation of the galleries of European art, 1800–1945, funded by the Marion and Henry Bloch Family Foundation. The new Mondrian acquisition will be integrated into the museum’s European collection of paintings, sculptures and decorative arts. These galleries will present a new interpretation of 19th- and early-20th-century European art as an intense period of innovation, modernization and change.

The acquisition of Stammer Mill with Streaked Sky complements the musem’s collection of  masterworks of this period and situates this early landscape by Mondrian as an extension of the Dutch landscape tradition of the 17th-century. The work has strong connections to Dutch period works by Vincent van Gogh in subject matter and tonality. The painting also marks a turning point for the artist. Mondrian’s well-known geometric compositional order begins to be suggested. The blades of the windmill are arranged as verticals and horizontals. The sky is horizontally banded with the three primary colors of red, yellow and blue, and the grid of the bridge is clearly delineated. These changes occurred at a time when Mondrian’s outlook was influenced by a new interest in spiritualism.

Throughout his career, art and philosophy were deeply intertwined for Mondrian. In 1908 he joined the Theosophical Society, a spiritual organization based on the teachings of Buddhism. Theosophy influenced his representational style in works that echo the Buddhist and theosophist cycle of death and rebirth. He began to focus on individual objects, such as the windmill in this painting. Mondrian’s paintings continued to evolve in a logical manner, conveying the influence of modern art movements such as Symbolism, Luminism, Impressionism, and most importantly, Cubism.

“This is a remarkable acquisition that adds even more depth to the Dutch collection of the Nelson-Atkins, which already includes Salomon van Ruysdael’s Landscape with Ferry,” said Catherine Futter, Director of Curatorial Affairs. “Stammer Mill also provides an intriguing counterpoint to Paul Cezanne’s Mont Saint Victoire of the same period, in their movement toward the abstraction of form and space. They will both be featured in the new Bloch Galleries.”

In later years, Mondrian continued to refine and distill his compositions and colors, reducing his palette to pure red, yellow, blue and black. By 1929, his classic black-on-white grid composition with various rectangles of primary color was firmly established. Stammer Mill with Streaked Sky clearly demonstrates Mondrian’s continuation of Dutch landscape painting, his link to van Gogh’s Dutch period paintings and his first steps towards the abstraction that was to bring him renown.

Image caption: Piet Mondrian, Dutch, 1872-1944. Stammer Mill with Streaked Sky, 1905-1907. Oil on canvas. Unframed: 29 1/4 × 38 inches (74.3 × 96.52 cm). Purchase: William Rockhill Nelson Trust through the George H. and Elizabeth O. Davis Fund
The Nelson-Atkins in Kansas City is recognized nationally and internationally as one of America’s finest art museums. The Nelson-Atkins serves the community by providing access and insight into its renowned collection of nearly 40,000 art objects and is best known for its Asian art, European and American paintings, photography, modern sculpture, and new American Indian and Egyptian galleries. Housing a major art research library and the Ford Learning Center, the Museum is a key educational resource for the region. The institution-wide transformation of the Nelson-Atkins has included the 165,000-square-foot Bloch Building expansion and renovation of the original 1933 Nelson-Atkins Building.