Why do Kansas City and the Nelson-Atkins look the way they do? In this episode, we rewind to the beginning of the 1900s. Kansas City was booming from a Cow Town to the Paris of the Plains, and a few city planners and real estate developers saw opportunity. We meet J.C. Nichols, a real estate developer who perfected racially restrictive covenants and who made big decisions about the Nelson-Atkins when it opened. Along the way we go for a Sunday drive.

Congressman Emanuel Cleaver, II, is now serving his ninth term representing Missouri’s Fifth Congressional District. He has been nationally recognized for being a champion of civility and bipartisanship. In 1991, he was elected as Kansas City’s first African American Mayor. The Congressman and his wife, Dianne, along with their four children and five grandchildren, have lived in Kansas City for more than 40 years. For 37 of those years, he served as the Senior Pastor at St. James United Methodist Church, a post which one of his sons now holds.

Chiluba Musonda is the Deputy Director of Operations & Organizational Development at the Kansas City Museum. In 2015, Chiluba published a memoir titled Home Away from Home: The Story of an International Student’s Journey from Africa to America. The book offers a unique perspective on life in America as seen through the eyes of a Black immigrant. Outside of work, Chiluba is a proud dad of two little girls, and spends his free time offering community presentations on a range of topics that include culture shock, the hidden costs of immigration, and the role of foreign aid in the developing world.

Angel Tucker has worked in Youth Services at Johnson County Library for 18 years and currently serves as the Youth Services Manager. She oversees programming and outreach for ages birth to 18, caregivers, and educators. She is the founder of elementia, Johnson County Library’s nationally recognized visual and literary arts magazine for young adults, and she currently coordinates Race Project KC, an equity initiative that aims to bring students and educators together to discuss the history of race, equity, and inclusion in the United States.

Jacob A. Wagner, PhD, is an Associate Professor of Urban Planning & Design. He served as the Principal Investigator for the project entitled Planning for Heritage Tourism, Housing Resettlement and Neighborhood Economic Recovery in New Orleans, Louisiana, 2006-2008. In 2015, he established the Center for Neighborhoods (CFN) as a research and outreach center with Missouri Senator Shalonn “Kiki” Curls. He is a member of the editorial board of the Journal of Urban Design. In 2017, Dr. Wagner’s helped to establish Kansas City as a member of the UNESCO Creative City Network.

Glenn A. North is an award-winning poet, activist, educator, and arts executive based in Kansas City. He is currently the Director of Inclusive Learning & Creative Impact at the Kansas City Museum. He has previously served at the Bruce R. Watkins Cultural Center, American Jazz Museum, and The Black Archives of Mid-America. Having earned an M.F.A. in Poetry from the University of Missouri-Kansas City, Glenn also conducts Ekphrastic poetry workshops, as well as using poetry to address issues of social justice, diversity, equity, and inclusion, and self-empowerment.

The Art in the Episode 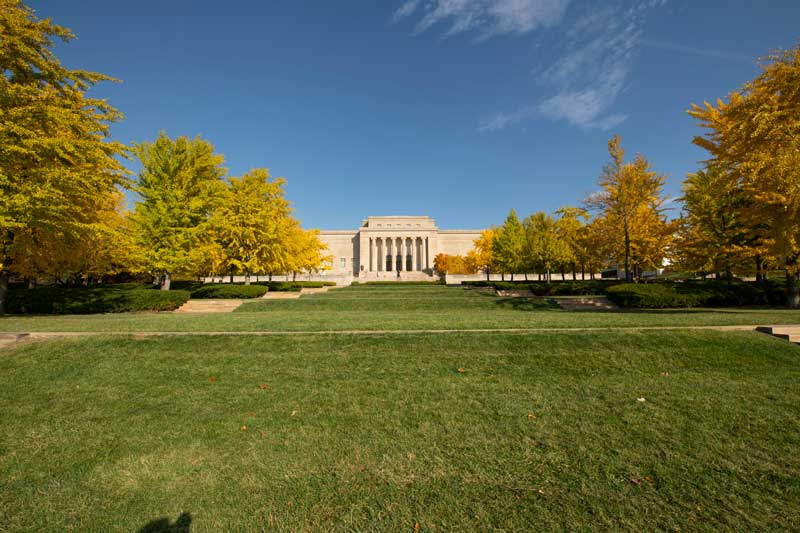 This is a view of the original 1933 building of the Nelson-Atkins Museum of Art from the south at Emanuel Cleaver II Boulevard. Wight & Wight, the architecture firm that designed it, included visual references to ancient Greek architecture, like the massive columns on all four sides of the building. For some people, that suggests a kind of permanence and endurance of art and culture, from antiquity to now. At the same time, this building, the grounds, and the art inside are constantly changing and responding to the current moment in Kansas City and beyond.

Dividing Lines: A virtual tour of the history of residential segregation in Kansas City, produced by the Johnson County Library. (The turn onto Brookside Boulevard in Chapter 1, 23min58sec, is a block from the Nelson-Atkins Museum of Art.)

A City Divided: The Racial Landscape of Kansas City, 1900-1960: A book by Sherry Lamb Schirmer on white Kansas Citians’ perceptions of race and how those perceptions shaped the physical landscape of the city from 1900 to 1960.

A Changing Troost: Troost Avenue, often code for racial segregation and inequality in Kansas City, has been undergoing change that some call gentrification, others call revitalization.

Explore the neighborhood of the Nelson-Atkins, at a crossroads between J.C. Nichols neighborhoods and Troost Avenue.

A Frame of Mind is the podcast of the Nelson-Atkins. This episode was produced and co-written by Glenn North and Christine Murray. Editing and sound design by Brandi Howell. Interview recording by Tim Harte. Studio engineering by Simpson Sound Lab. Fact checking by Kate Carpenter. Theme music by The Black Creatures. Additional music by Eclipse. Cover art by Two Tone Press.

Produced in partnership with Jocelyn Edens and Kim Masteller, and with support from Anne Manning, Rachel Nicholson, Brent Bellew and the Nelson-Atkins Teen Council.

Produced with generous support from Bank of America, N.A., Trustee of the John W. and Effie E. Speas Memorial Trust.