PLEASE NOTE: The Presepio and Holiday Tree will not be on view between December 6–December 14, 2022 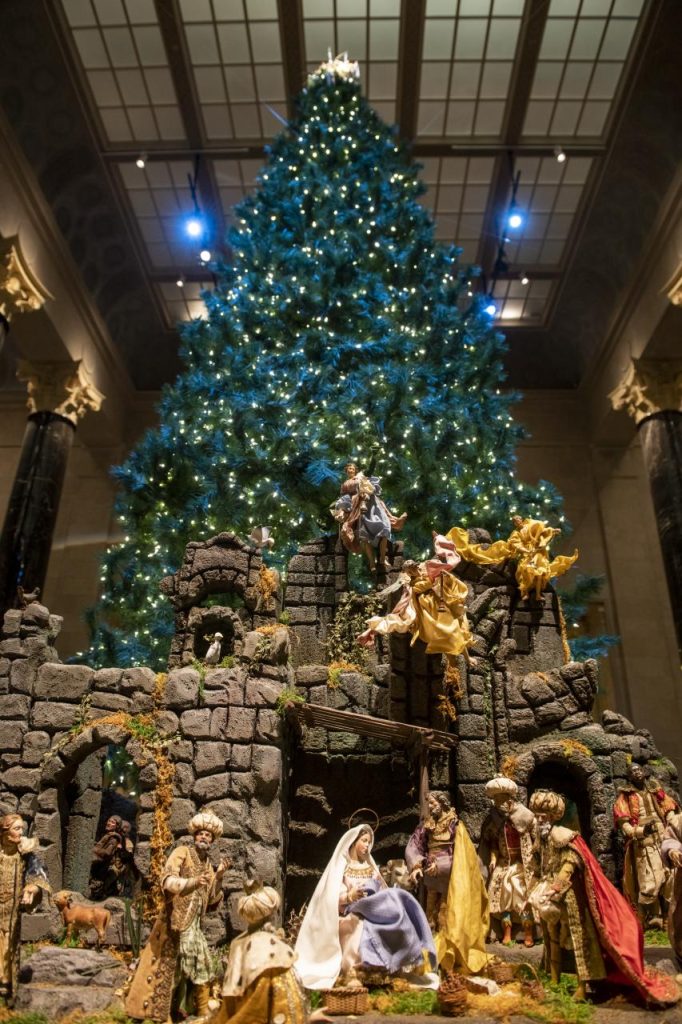 Derived from the Latin Praesaepe, meaning stable, the Italian crèche figures were elaborately carved and modeled in Naples during the 17th and 18th centuries. Wealthy Neapolitan families held open houses at Christmas time to display their figures. So eager were they to outdo their neighbors, they commissioned sculptors to fashion sumptuous settings and richly adorned figures. These sculptors became highly specialized in their art: one excelled at peasants, another made shepherds and yet another was famous for his animals or angels. The height of the figures ranged from eight inches to fifteen inches according to the position they were to take in the perspective of the setting. The heads and hands of many of the figures are delicately molded terra cotta or finely carved wood, and the bodies are cloth over wire armature. Most of the elaborate costumes are original, but many have been carefully restored by Vincent Scassellati, Professor Emeriti, University of Missouri, Kansas City Theater Department.

In 1917, Mrs. Sallie Casey Thayer of Kansas City gave her collection of art, including Presepio figures to the University of Kansas. Thayer purchased many of the Presepio figures from Prince Fabrizio Massimo after seeing them exhibited at the Castel Sant’Angelo in Rome.

This traditional Neapolitan nativity scene is depicted amidst an ancient Roman ruin, clustered at the base of a 22 foot tree. The tree is a gift of the Westport Garden Club. The 40 inch copper, gold and silver star was given to the Museum in memory of Mildred Peet Welch by her daughters, Mrs. John D. Bowe and Mrs. Hoyt T. Thompson.

Many of the Presepio figures are on indefinite loan from the Spencer Museum of Art in Lawrence, Kansas.